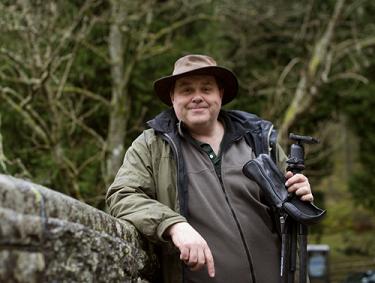 I was born in Hampstead but grew up in Essex. I hated boarding school. One salvation was to hide away in the darkroom, so I did a lot of photography. I left when I was 15, which caused lots of agro as the minimum was 16, and got a job in a garage. I did my A levels at evening classes.

Malcolm Bradbury offered me a place to read English at UEA on the strength of my short stories, but my mum was short of money so I decided to get a job instead. For 10 years I was a yuppie, insuring race horses in Lloyds and had a suitably excessive life. But then I grew up.

I realised I should have gone to uni, so, lack of ambition or modesty never being a problem for me, I applied to Oxford. I studied under the great Wordsworth scholar Stephen Gill, an amazing man, not least in his patience in having a pupil like me. Most of my work was located in the poetry of landscape or writing on its aesthetics and Oxford gave me the time I had not had for a decade to take lots of photographs.

I tried to get into the Royal College of Art to do an MA, got down to the final shortlist of 25 or so for interview, but did not get one of the handful of places. So, once again, practicality meant I went and got a job.

At uni I had helped fundraise on the phone for Lincoln College. I had raised good money and they asked me to work in their Development Office. I did this and then at other places for several years and over that time quite a few places asked my advice on how to do telephone fundraising. In the end, I set up a consultancy. It grew and grew, because every university and school in the world is short of money and now we have offices in the UK, Australia and Hong Kong. We are now even doing campaigns in mainland China.

The business is demanding, but it gave me one important thing: access to extensive travel. I did not waste it. I take my camera wherever I go. Sometimes I only have time for the cities, and so I concentrate on street photography and urban landscapes. Sometimes I can get out to the country and I do my other love, landscapes. But there isn’t so much difference between either. I don’t pose portraits, so both styles are about finding my response of the world as I find it: an interplay between what is and what I can make it.

Publications
From the Marches to the Sea – a photographic journey, Logaston Press, 2011